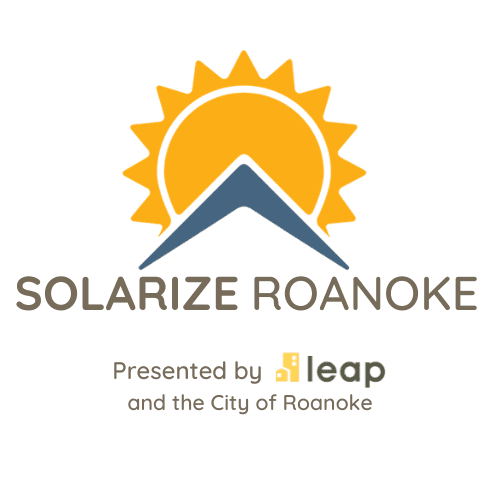 What is Solarize Virginia?

Solarize Virginia is a community-based outreach initiative managed by the local nonprofit LEAP (Local Energy Alliance Program). It reduces the cost and complexity of going solar by providing a one-stop shop for education and installation. Through a competitive review process, LEAP evaluates proposals from local installers and selects high-quality installers that commit to providing discounted prices to all program participants. After you sign up, LEAP will do a free solar satellite assessment to see if you are a good fit for solar. If you are, you will be connected with one of our pre-selected installers who will guide you through the process of solarizing your home.

Throughout the process, experts at LEAP will be by your side to provide ongoing customer support and education to make the experience as streamlined as possible.

The City of Roanoke is committed to making “clean and green” an integral part of the way we do business. We work in partnership with residents, businesses, schools, and civic organizations to take an active role and responsibility for improving and preserving the visual appeal and natural beauty of the community.  For more information please read the official Clean and Green Pledge (PDF).
On Sept. 2, 2008, Roanoke City Council signed onto ICLEI/ Local Governments for Sustainability and adopted greenhouse gas (GHG) reduction targets for the city and community. Council committed by resolution to reduce GHG emissions from municipal operations by a total of 12.5% over a five-year period between Jan. 1, 2009 and Dec. 31, 2014. Council also established a goal to reduce community-wide GHG emissions by 10% over a five-year period during the same time frame. At the end of CY 2014 the city had surpassed the municipal goal by achieving a 25% GHG reduction and an impressive 13% for the community.

With these emission reduction targets in mind, City staff was charged with developing a Climate Action Plan for the Roanoke community and implementing the programs, initiatives and best practices to the extent practical and achievable within available funding and resources.

Roanoke has completed the community inventory every year since 2008. The municipal footprint is now on a biannual basis with the last completed GHG measurement in 2014. ICLEI provides the city with a reporting software ClearPath which is used by a large number of cities across the world. ClearPath provides consistency in data collection and analytics.

In 2012 Roanoke joined the Better Building Challenge as an early adopter, the city committed to a 20% energy reduction on  over a million square feet by 2022. In 2018, Roanoke achieved a 23% reduction becoming a U.S. Department of Energy - Better Buildings Challenge GOAL ACHIEVER!

The Citizens for Clean and Green Committee is a group of volunteers in the City of Roanoke who are tasked with carrying forward the mission of the city's Clean and Green initiative. The Clean and Green Campaign was launched in September 2007 by City Council member Gwen Mason as a way encourage the city to "green" its operations, as well as raise awareness among citizens and engage them in a community-wide effort to reduce our collective carbon footprint. The campaign was designed to run for 18 months, but the vision was that the city would make sound environmental practices a permanent part of the way it does business, and also that good environmental stewardship was something the entire Roanoke Valley could embrace as it looks to the future.

Since its formation, the Citizens for Clean and Green Committee has undertaken a number of projects. One of these is organizing the City of Roanoke Green Academy. These free, five-week educational workshops offer area residents a primer on topics ranging from energy and water conservation to green building and alternative transportation. The committee has supported and participated in Earth Day activities and the annual Green Living and Energy Expo, as well as the development of Cafe2 (Community Alliance for Energy Efficiency)in the Roanoke and New River Valleys, and the new regional Save A Ton educational initiative.

Roanoke is solar friendly and has streamlined the solar permit process to comply with the Solsmart Bronze Certification level. Roanoke also offers an Equipment Tax Abatement for solar purchase and installation. to learn more about solar click here.

The Office of Sustainability is happy to provide resources and expertise to businesses in the city that are interesting in "greening" their operations, contact Nell Boyle.

BRITE is a public-private partnership creating beautiful landscaping vignettes along I-581/220 interchanges in the city of Roanoke through the generosity of corporate sponsorship. Click here for more information.