Help From Citizens To give crews a better opportunity to clear snow from the streets, citizens are asked to park in a driveway if possible. If you can’t do that, and parking presently occurs on both sides of your street, park on 1 side of the street only (the side with the odd-numbered houses). Please do not park directly across from another car, it creates a bottleneck and can slow down the process or even prevent a plow from clearing the street.

It’s important to have certain numbers handy during a storm. Please remember:

The city subscribes to a weather service that provides detailed forecasts. When a winter storm is forecasted at 50% probability or more, crews are mobilized and equipment is prepared.

How crews prepare roads before a storm is dictated by the type of weather event. Major streets and trouble spots are pre-treated only if the storm is forecasted to start as snow.

Clearing Snow
When clearing snow from driveways and parking lots, residents and businesses are asked to refrain from pushing snow into the street as it impedes the work of snow plows and may be inadvertently pushed back into the driveway. To minimize the amount of snow across the driveway, shovel snow to the right side of the driveway (looking at the street.) Clearing a space immediately to the left of the driveway can provide a space for the snow already on the face of the plow and further lessen the amount of snow across the driveway. Citizens are also reminded that they are responsible for clearing snow from sidewalks adjoining their property within three hours after a snowfall ends or, if snow falls overnight, by 9 a.m. the next morning. 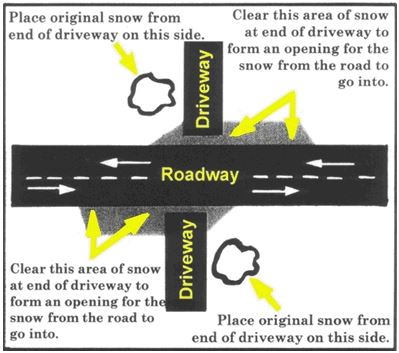