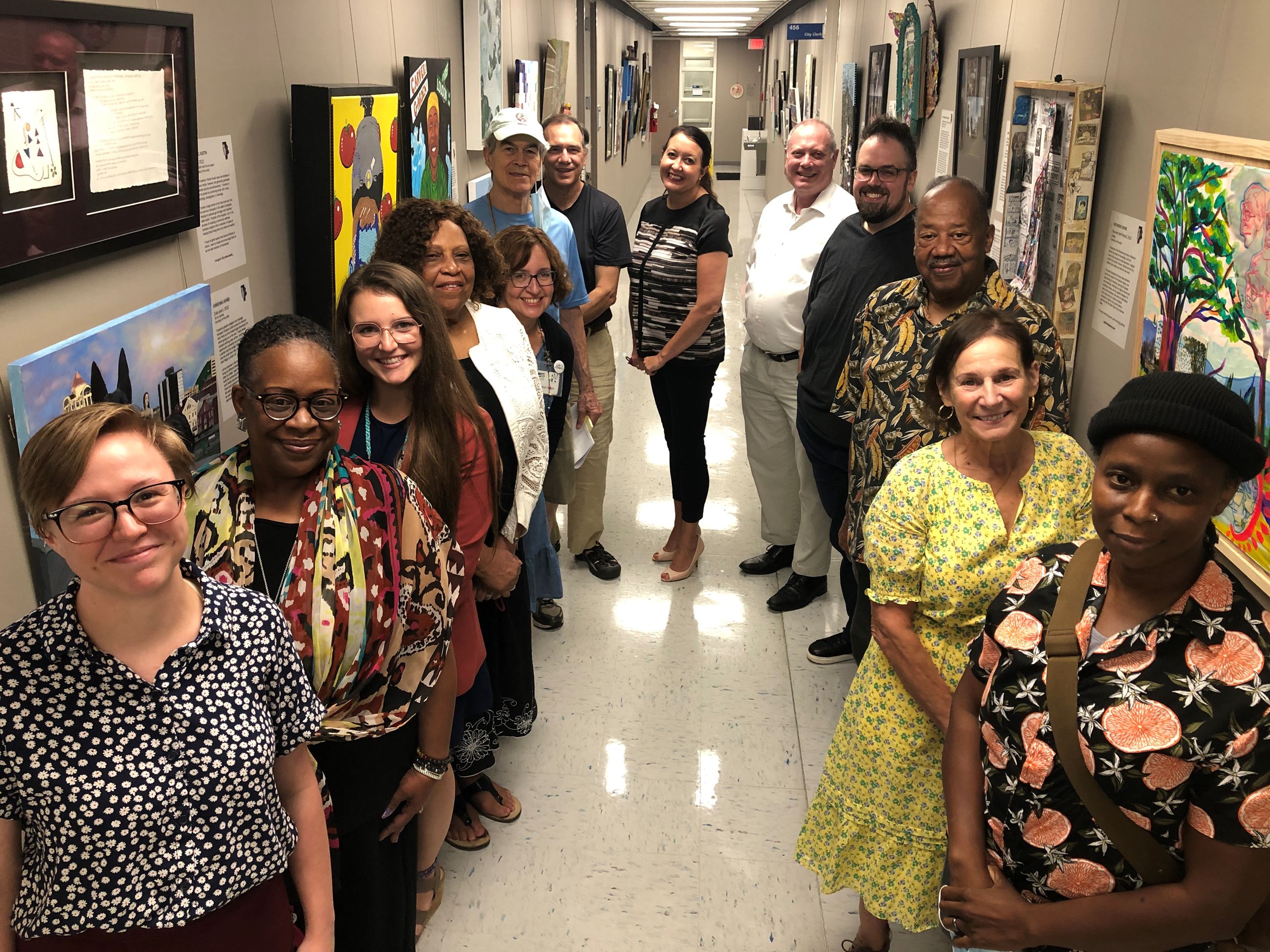 /DocumentCenter/View/18187The Roanoke Arts Commission (RAC) was established by Ordinance No. 26537 in 1983 to “advise and assist City Council on matters relating to the advancement of the arts and humanities within the city." Each member is elected by Council to a three-year term. Terms can be renewed twice if reappointed by Council. Members are limited to three consecutive terms as set out in Section 2-281.1 of the City Code.

Since 2003, the RAC has been heavily involved in the  development and implementation of both the City of Roanoke’s first Public Art Plan, adopted by City Council in April of 2006, and the City’s first  Arts and Cultural Plan, adopted in 2011. The growth of the public art collection is overseen by the Collections Committee of the RAC. The City commissioned its first public art project, a permanent 30-foot tall stainless steel sculpture by Rodney Carroll of Baltimore, under the Percent-for-Art Program.  The piece was dedicated at the Roanoke Performing Arts Center (now Berglund Center) in October 2008.  That same month the RAC launched the city’s first temporary exhibit “AIR: Art in Roanoke” by placing eight temporary pieces around the city for 18 months.  By 2015 more than 25 works had been added to the city’s public art collection. The current temporary sculptures in Elmwood Park will remain through November 2018.  New pieces will rotate in Spring 2019. All permanent and temporary public art projects are supported by a one percent for art ordinance whereby one percent of the cost of certain items in the Capital Improvement Budget is dedicated to the public art program annually.

The Planning and Marketing Committee of the RAC oversees the implementation of the Arts and Cultural Plan. Working with community partners since the plan’s adoption various goals and actions have been brought to fruition.  These are outlined in the progress reports contained in the “documents” portion of the arts and culture web pages.  Among noteworthy accomplishments are the establishment of the Parks and Arts Program, presentation of a Cultural Summit in 2013 which led to the development of the Roanoke Cultural Endowment, a series of Mini Grants which funded an artist exchange, a community mural and historic signage programs among other projects, sponsoring a Neighborhood Arts Award and aligning city grants to arts and cultural organizations to implementation of the city’s arts and cultural plan.The Agency Funding Advisory Committee of the RAC makes annual recommendations to Council for the expenditure of funds to arts and cultural nonprofit organizations. Applications are available through the Department of Economic Development around the middle of December each year.The RAC has been awarded three grants from the National Endowment for the Arts.  A conservation grant to complete an assessment of the entire public art collection was received in 2010.  An “Our Town Grant,” received in 2012, was used to present the Parks and Arts Program.  Designed to take the arts into neighborhoods, the City won a National Council of Mayors Livability Award for the Parks and Arts Program in 2014. In 2014 Parks and Arts was funded by a grant from the Foundation for Roanoke Valley.  In 2018 the RAC received a “Challenge America Grant” to work with the community to develop plans to place public art under the Memorial Avenue Bridge. In 2014 the Roanoke Arts Commission received the inaugural Harriett Stokes Award presented at the Perry F. Kendig Awards for Outstanding Support of Arts and Culture.  The award is presented annually by Roanoke College and Hollins University.

The Agency Funding Advisory Committee of the Roanoke Arts Commission (RAC) makes annual recommendations to Council for the expenditure of funds to arts and cultural nonprofit organizations. Applications are available through the Office of Arts and Culture in early December every year.