Since the Roanoke River drains a much larger area than any of the other creeks in Roanoke, its flood waters are more easily predicted in advance. To aid in this prediction, the City maintains a number of rainfall and stream gauges as far away as Blacksburg. These gauges allow officials to predict when and how high flooding will be along the Roanoke River. Flooding along the Roanoke River can typically be predicted 6 to 12 hours before it occurs, and warning information will be broadcast over local radio and television stations. In the event of heavy rainfall, tune in to local radio news station WFIR AM 960, or other local radio or television stations like Roanoke Valley Television RVTV-3 to listen for flood warnings in your area. Visit the National Weather Service website for information on flood warnings and current river levels in your area. The best gauge for the City to use is the Walnut Street Gauge and is linked below.

The Walnut Street Gauge helps City staff including first responders and citizens know the current and projected height or stage the Roanoke River will crest during high flow events. It’s also used for recreation enthusiasts to understand when river levels may be too high or too low to navigate safely.

The National Weather Service in the Blacksburg Office oversees the Walnut Street Gauge, which measures flood stage and velocity of speed of the flowing water. A hydrograph shows how the river level changes over time at a specific location. Links to past and forecast precipitation, river level impact and historical flood information are also included on the Walnut Street Gauge webpage. An example of the hydrograph is below.

For example when the Walnut Bridge gauge measures the following heights there are certain areas that begin to be covered with water.

For information on flood warnings and current river levels in your area, visit the following websites:

Precipitation and Stream Gauges in Roanoke

How much did it rain? Is it Flooding?

A Flood Warning means flooding is imminent or has occurred - Take Action.

The Roanoke River flood stage is 10 ft. at the Walnut Ave gauge.

There is no better time than now to prepare for a flood. Sign up for the Emergency Alert System (EAS) and the City’s Citizen Alert Notification system to receive emergency notifications.

Visit Ready.gov to make a plan and be prepared. 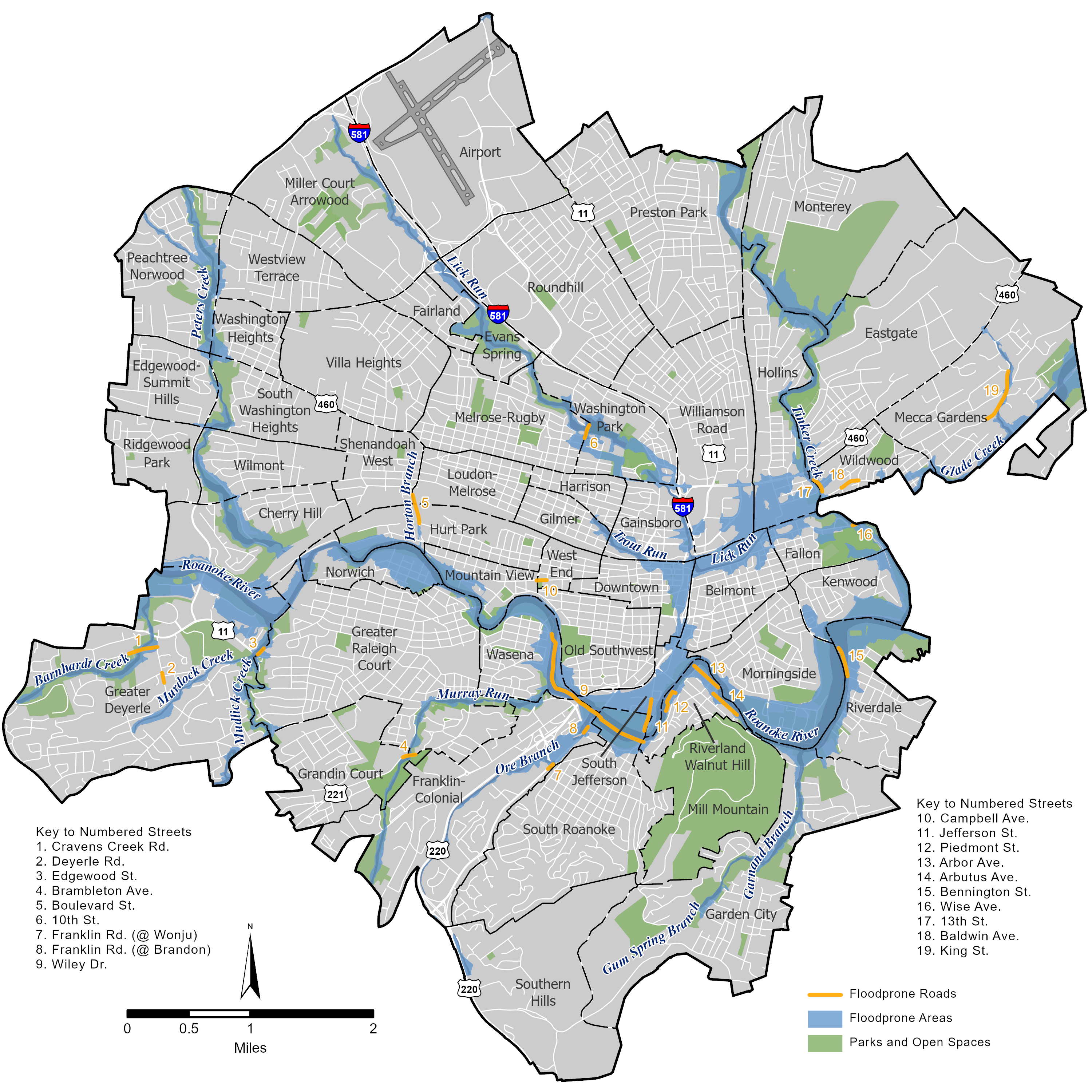