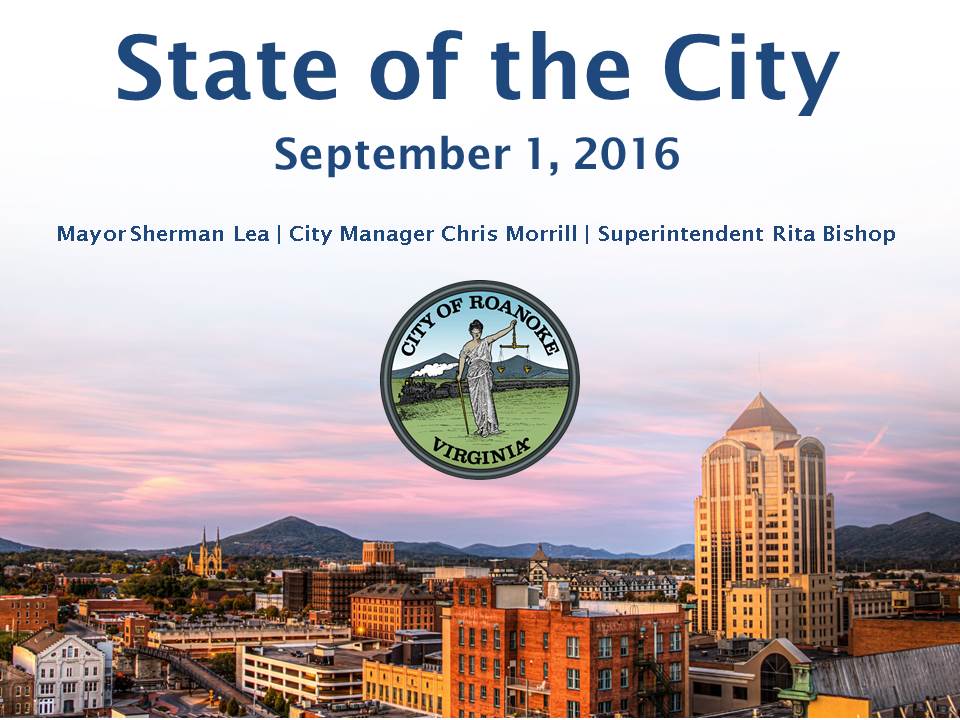 
Thank you Mr. Morrill and Dr. Bishop for sharing the success of our city government and city schools during this past fiscal year. I hope you are encouraged to hear all the positive things that have been accomplished.

Vince Lombardi, well-known head coach and general manager of the Green Bay Packers, once noted “The achievements of an organization are the results of the combined effort of each individual.” In other words, Teamwork.

Roanoke City Council, our employees, and School Administration are a great team, and this year we’ve seen the product of their effective Teamwork in our local government.

Going forward, my focus as your Mayor will be to continue to work with all of you to set and achieve new goals, and to strengthen the connection with our citizens.

Before talking about the future, I think it’s important to note our challenges: Roanoke’s population includes a significant number of people who live in poverty. Part of our responsibility as leaders is to invest in our community and do what we can to reverse this situation. It is vital for us to provide opportunities for these citizens to lift themselves out of poverty and become active in the things that will move our community forward.

Looking at where we are as a city today, there is much to celebrate. But there are areas we must stay focused on and continue to address in order to ensure our success. Things like:

• Maintaining a low crime rate,
• Supporting our public schools to provide quality education for our children,
• Partnering with community agencies for job programs and opportunities for employment, and
• Identifying and supporting programs to address drug abuse, domestic violence, and homelessness.

Roanoke has already taken the first step by dedicating funds and offering support for many of these challenges.

This past year, a spotlight was shown on student homelessness. Roanoke City Public Schools ended the 2015-2016 School Year with 589 homeless students. Several campaigns and partnerships are now in place to address this issue.

• Roanoke City Public Schools has raised more than $27,000 to help its homeless students through various fundraising efforts and donations from individuals.
• The schools have also formed a partnership with Roanoke’s Homeless Assistance Team to prevent families from becoming homeless. The school system has helped to pay rent, a down payment, or an electricity bill. School officials strongly believe this partnership has led to a decrease in the number of homeless students. To date, the school system has assisted 26 families (48 students).
• Moving forward, the United Way of Roanoke Valley has launched a program called RYSE (Rehousing Youth for Success in Education), with the goal to end student homelessness in the Roanoke Valley. The program works with local schools to identify homeless children and put their families on the pathway to self-sufficiency.

Abraham Lincoln once said, “The best way to predict your future is to create it.” Roanoke is creating its future by doing things right now that will yield positive results for generations to come.

Business is a major factor in building a strong and resilient economy, and I am excited about the prospects for the coming year.
Roanoke’s future business scene will be enhanced by:

• Virginia Tech’s plans to create a Sciences and Technology Innovation Corridor in Roanoke to expand and develop its health sciences and technology research.
• Carilion Clinic’s plan to expand Roanoke Memorial Hospital.
• Fuji Electric’s opening of a new engineering and assembly facility to grow and expand their business activities in the United States.
• The Rapid Acceleration and Mentoring Program, known as RAMP – Economic Development staff are working with Virginia Western Community College and the Roanoke Blacksburg Technology Council to support this program, which fosters the growth of high-potential startup technology and health science companies.
• The availability of a new broadband network provided by the Roanoke Valley Broadband Authority to support economic development.
• And of course, the announcement earlier this year that after a nearly four year search, Deschutes selected Roanoke for its east coast brewery.

The city is shaping its future through partnerships with local agencies. A good example is our partnership for Tourism and the business it brings to our city.

• Through our regional partnership with the City of Salem, and Counties of Roanoke, Botetourt, and Franklin, we will continue to support tourism.
• The Convention and Visitors Bureau’s rebranding as Visit Virginia’s Blue Ridge has laid the foundation for stronger promotion and marketing of all the amenities we have to offer.
• The ongoing practice of hosting media tours for journalists from across the country to visit and write about this area will expose Virginia’s Blue Ridge to readers on a national level. In 2015-2016, visiting journalist wrote 64 articles mentioning the City of Roanoke.
• New accommodations to bring visitors and conferences to Roanoke include the Hampton Inn & Suites in Downtown, Home2 Suites at Valley View, and Amtrak passenger rail.
• A Destination Vision Plan has been established to map out future goals for tourism including Regional Wayfinding, and creating a Mountain Biking Destination using Mill Mountain and Carvins Cove as assets.

Another partnership involves the city’s support for Student Employment.

• In April the Roanoke Youth Services Citizen Board partnered with Family Service of the Roanoke Valley to offer a Youth Career Fair at Global Youth Service Day. Goodwill of the Roanoke Valley, Total Action for Progress, Rescare, and Kroger were in attendance.
• The City of Roanoke provided Total Action for Progress funding to expand its current Summer Youth Employment Program.
• Agencies that provide youth employment opportunities in the summer and year-round were on hand at the 2016 Youth Summit.
• In addition, the City of Roanoke is researching a program in conjunction with Goodwill of the Roanoke Valley and local businesses to provide Summer Employment Opportunities to youth for the summer of 2017.

We are creating relationships between local government and our community with programs like the Lea Youth Outdoor Basketball League. The league gives youth ages 11 to 18 a quality summertime activity as well as an opportunity to interact with our police officers. In 2016, the league played in Melrose and Fallon parks, with 171 youth participating. Plans are to continue this effort as a way to strengthen relationships between police and the community.

Another good example is the annual Roanoke Youth Summit. This year’s event was held on Aug. 6 at William Fleming High School, under the leadership of Vice Mayor Anita Price and the Roanoke Youth Services Citizen Board. An estimated 100 students and parents attended and participated in discussion groups. Future summits are in the works.

While our neighborhoods continue to see improvements with refurbished parks and libraries, we are also creating a strong downtown community, as residential growth in this area continues to be strong.

Downtown apartment buildings are seeing high occupancy rates and developers are continuing to see strong demand for more of these living spaces. With the completion of the Gramercy Row at Williamson and Tazewell, Roanoke will surpass 1,000 units created since 2000. This growth has been a catalyst to the City’s population growth.

The city targets specific areas of the community to receive a majority of funds from the U.S. Department of Housing and Urban Development to help revitalize neighborhoods, improve affordable housing, provide public services, and encourage private investment.
Over the past few years, the West End neighborhood has been the focus of HUD funds. Efforts there have successfully wrapped up and the emphasis on renewal is moving to the Melrose-Orange Target Area.
This area, in Northwest Roanoke, incorporates 10th Street to 24th Street, and Loudon Avenue to Hanover Avenue. As work continues, city staff will annually invite residents, property owners, businesses and other stakeholders in the target area to provide input as to what activities are most in need.

We are fashioning our future by exploring new approaches to solving problems. For instance, Roanoke Valley Hope is a new initiative that aims to tackle drug addiction in a way that's never been done in Roanoke.Launched on Aug. 8, the initiative allows people suffering from substance abuse to get rid of their drugs without fear of being arrested. The Roanoke Police Department invites those suffering from addiction to contact them for help. Working through the Bradley Free Clinic, respondents are fast-tracked for treatment through the participating community resources, and paired with volunteer "angels" who will help along the way.

This initiative is the first of its kind in Virginia, bringing together multiple community resources working toward one common goal: Saving lives.

While the initiative begins a shift from arrest to treatment, it's not a replacement. Those who interact with police in other ways and are found to have drugs or are committing a crime can still be arrested by police. But there is help, there is hope, and we care—that's the message I want to drive home as the mayor of the city of Roanoke, we care.

City Council invests in a bright future for our community by ensuring our infrastructure is safe and well maintained. To that end, Roanoke’s future success depends on the completion of major projects such as bridge replacements. I am proud to say the city’s bridge program is one of best in the state of Virginia, and Roanoke will continue to invest in and maintain our bridges well.

However, many older bridges like the one on Franklin Road, built in 1937, have reached the point where we can no longer repair them; they must be replaced. Work to replace the Franklin Road Bridge is anticipated to begin near the end of this calendar year, with the bridge’s closure likely in early 2017. Improvements will include greenway accommodations, bike lanes, and gateway features. Projects like this one are a good indication of City Council’s commitment to adequately support the city’s infrastructure.

Renovation of the Williamson Road Library is another example of building our future. When completed in summer 2017, the new library will have nearly 10,400 square feet of floor space and offer quality amenities:

• "Self-check" units to speed check out,
• A drive-up book drop accessible all hours of the day,
• A larger and better-equipped community meeting room that will seat 100 people, and
• Improved amenities for children, teens and adults.

Preliminary planning has already begun for upgrades to the Melrose Branch Library, which are anticipated to begin upon the re-opening of the Williamson Road Branch.

These are just samples of the exciting ways we are working to continue our success as a city, and there will be more to come.
Our ongoing progress will take Teamwork, focused on a single purpose: To make Roanoke the best it can be for all its citizens and businesses.

Everyone is and must continue to be part of Roanoke’s resurgence. I ask you to commit to work with Roanoke City Council and city leaders to create a great future, one in which all citizens play a role and take ownership of making our incredible potential a reality.