At 8:22 p.m. on November 23, 1949, a chilly Thanksgiving Eve, Roanoke Mayor, A.R. Minton, threw a switch and illuminated the Roanoke Star for the first time. It was over 50 years ago Roanoke earned the nickname, “Star City of the South,” and the star has been a part of the landscape of Mill Mountain ever since.

Why was the “Star” constructed in the first place? The purpose for erecting the star was to serve as a seasonal, Christmas decoration to shine over the city during the brisk holiday shopping season of 1949. The project was sponsored by the Roanoke Merchants Association. The original plan was to dismantle the star when the holiday season ended. John Payne, a Roanoke native and, at the time, a Hollywood leading man, came to Roanoke to add his celebrity status to the formal lighting ceremony. Less than 100 people braved the cold night to stand under the star as it was switched on. 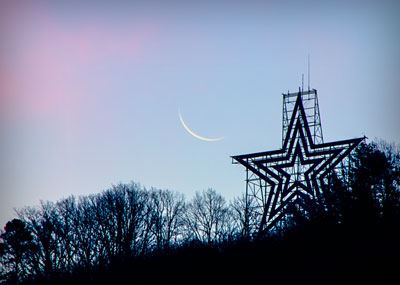 Who built it?
Roy C. Kinsey, then owner of Kinsey Sign Co., built it along with his three sons, Roy Jr., Bob, and Warren. Bob and Warren designed and built the neon tubing still used today. The “Star” is actually three stars – a small star in the center, enveloped by a larger, mid-sized frame, and surrounded by the largest outer frame. Each frame contains three to five sets of clear neon tubes.

Changes for Star Colors
The Roanoke Star was originally illuminated white on Nov. 23, 1949, and served as the brightest and most powerful symbol of Roanoke. In the past 10 years, City Council has changed the star’s color on only three occasions: In September 2001, when Council chose to light the Roanoke Star red, white, and blue as a tribute in response to the Sept. 11, 2001, attacks; in April 2007, when the star remained white from April 22 to May 24 in honor of the victims of the Virginia Tech shootings; and on April 16, 2008, when the star went dark for one evening on the first anniversary of the Virginia Tech shootings. On April 17, 2008, the star was again illuminated red, white, and blue. On Sept. 11, 2011 at sunset, the city illuminated the Roanoke Star “all white” in commemoration of the victims of the 9/11 terrorist attack. Going forward, the star will remain white year-round but will be illuminated red, white, and blue on the following days as a tribute and sign of patriotism: Memorial Day (May), Flag Day (June 14), July 4, Sept. 11, and Veteran’s Day (Nov. 11). These targeted displays of red, white, and blue will have more impact as a way of demonstrating the community’s patriotism.
Pay Taxes & Bills
Council Agendas & Minutes
Stay Connected
Report Issues or Concerns
GIS & Mapping
Government Websites by CivicPlus®
[]